Who Did Robert Johnson Influence? 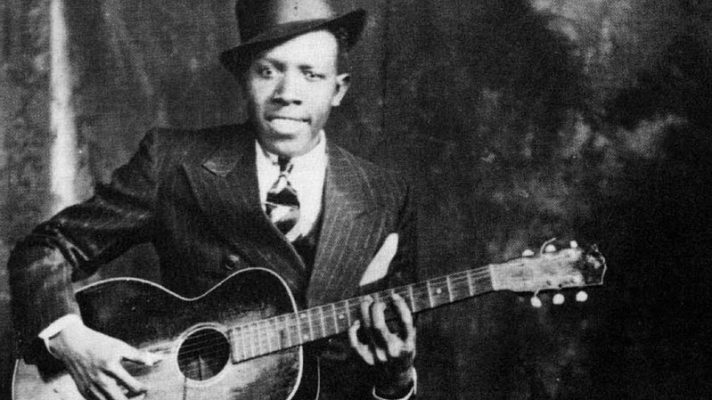 Before King of the Delta Blues Singers was released in 1961, Johnson’s influence was actually fairly limited.

However, after producer John Hammond helped to push for that album’s release, Bob Dylan, Eric Clapton, the Rolling Stones, and Led Zeppelin were soon key influences.

From there, since so many have then been influenced by those artists, Johnson’s had a remarkably strong primary and secondary influence on music ever since.

Looking back in time from the perspective of Rock n’ Roll, time and time again music “pundits” always say that Robert Johnson’s influence spanned far and wide. Definitely it’s quite fair to gauge that he exerted an influence, given how Eric Clapton, Keith Richards, and Led Zeppelin all covered Johnson’s songs at key moments of their growth. Diving deeper into this topic, how did this influence take shape on these figures?

Any influence that Johnson had would be after his fateful death. On August 16th 1938, according to legend, the Devil redeemed his guaranty on Johnson’s soul, taking him down to those fiery depths. But fortunately in 1936 and 1937, Johnson recorded a total of 29 songs, plus some alternate takes, on scratchy 78s.

Earlier Years Before the Folk Revival

Given how Johnson is celebrated today as a grandfather-like figure of Rock n’ Roll, you’d think his influence would’ve been felt immediately after his death. Perhaps Ike Turner was inspired by Johnson to record Rocket 88, or Fats Domino felt driven to then pioneer his music, or even perhaps Elvis Presley as well. It may come as a surprise, but most (if not all) of musical development from 1938 to 1961 happened as if Johnson never even existed. In other words, if you plucked him from timeline of music, travelling backwards in a Delorian and shooting him prior to his recordings, it’s likely that music from 1938 to 1961 would hardly have changed.

Why is this? Well, as odd as it sounds, given the hype that Johnson today is given (as if his recordings were pre-ordained to give birth to Rock), Johnson was relatively, if not completely, unknown to all, except for his inner circle of people such as Muddy Waters, BB King, Son House, Honeyboy Edwards, and Johnny Shines, as well as niche collectors of 78s who knew Johnson as another faceless, pre-war blues musician; it really wasn’t until the late 1980s that photographs of him even surfaced to the public.

Now, again, veering away from the popular narrative of Johnson being a kind of Picasso-like figure at the time, even to his peers who were musically active in the 1940s and 1950s, such as Muddy Waters and BB King, Johnson was still just another one of their peers. Even had Johnson not existed, there would be plenty of influences for Muddy Waters and King. From Charley Patton, to Tommy Johnson, to Bukka White, and so on.

So then where did his influence begin, if not right off that bat? Well a name who often arises in music history, in seemingly uncorrelated areas along the musical timeline, is John Hammond. His impact is confounding because not only did he help give Billie Holiday a break, but he also helped give Stevie Ray Vaughan a break. Now that is a remarkable stretch in terms of both genres and timespan. Somewhere between those two, he also helped give Robert Johnson his post-mortem break.

However, it began while he was still alive. In 1938, Hammond was planning a concert, honoring the recently deceased Empress of the Blues, Bessie Smith, who had died only a few months ago, in September of 1937. It would be called From Spirituals to Swing, illustrating the development of music from folk blues to jazz — with Sonny Terry, Count Basie, Big Joe Turner, as well as boogie players like Meade Lux Lewis, Albert Ammons, and Pete Johnson. To build that sense of foundational blues to the audience, Hammond desired to have a seminal sort of musician, and was recommended a fellow named Robert Johnson. Searching far and wide for Johnson, he finally located him and booked him for this live, recorded concert.

But just months before the concert, which was scheduled for late December 1938, Johnson died. As a replacement, Hammond instead hired Big Bill Broonzy.

Certainly a loss in that there could today have been several live recordings of Robert Johnson playing at Carnegie Hall, luckily Hammond wasn’t through with Johnson. And this was where Johnson would finally have his influence.

In 1961, the folk revival was brewing with full velocity, and Hammond, recalling Robert Johnson, urged Columbia Records to release a compilation of Johnson’s songs which lived on from his 78s. Agreeing with Hammond, the all-important album, the King of the Delta Blues Singers, was released. With tracks such as Crossroads, 32-20 Blues, and Travelling Riverside Blues, Johnson’s aesthetic as a no-sh#ts-given songwriter, with dark themes of hell and the devil, alongside his fast-fingered guitar playing, resonated with both American and British youth at the time, who were through with listening to the lovey-dovey Perry Como and Bing Crosby records of their parents. Not to say, however, that right off the bat, this Johnson album made waves — in fact, it even failed to hit the charts. But, it steadily permeated as a kind of underground album, which later exploded to the scene like a delayed reaction, after musical notables, one-by-one, began covering or being inspired by Johnson’s songs. One such player was Bob Dylan.

In fact, Bob Dylan, having also been brought under the wing of Hammond, was a new face in the music business in 1961. He’d just been signed with Columbia Records, around the same time that Hammond was finishing up King of the Delta Blues Singers. Giving Dylan an advanced, pre-release version of the album (since he knew that Dylan was quite interested in early blues), it had a fair amount of impact on him.

“If I hadn’t heard the Robert Johnson record when I did, there probably would have been hundreds of lines of mine that would have been shut down—that I wouldn’t have felt free enough or upraised enough to write.”

Dylan would later name one of his albums Highway 61 Revisited — a famous highway where notables’ childhood homes like Muddy Waters and Elvis were nearby, and also where Johnson had his notorious meeting at the Crossroads with the Devil.

Perhaps the most active torch-bearer of Johnson’s has been Clapton. Recording Ramblin’ On My Mind on John Mayall’s 1966 album, Bluesbreakers, Clapton clearly felt a rapid impact from Johnson. Soon after, when Clapton formed his supergroup, Cream, they really helped to bring Johnson to the fore, with their recording of Crossroad Blues on the 1968 album, Wheels On Fire.

For the past several decades, as Clapton has toured under his own name, he often comes out on-stage with an old Gibson flattop, halfway through the concert, playing songs like Ramblin’ On My Mind.

Later in 2004, he even recorded Johnson’s entire discography on his album, Me & Mr. Johnson. As he says, he feels such a deep connection with Johnson’s music that he avoids listneing to Johnson in mixed company, preferring to listen to Johnson in solitude.  To Clapton, Johnson is, “the most important blues musician who ever lived.”

The impact of early blues on the Rolling Stones is quite clear by the fact that their very name was inspired by blues. Their band, led by Brian Jones, was scheduled to play a show, so the promoter asked what their name was. Startled, as they hadn’t decided on a band name yet, he looked down at his feet where a record of Muddy Waters was lying on the floor; it was the song Rollin’ Stone, so that’s what he told the promoter.

Of course, Brian Jones, succumbing to the same 27 Club fate as Johnson himself, lived a short life, dying in 1969. But he really turned Mick Jagger and especially Keith Richards onto early blues. Richards recalled this quite vividly.

“Brian Jones had the first album, and that’s where I first heard it. I’d just met Brian, and I went around to his apartment-crash pad, actually, all he had in it was a chair, a record player, and a few records. One of which was Robert Johnson. He put it on, and it was just-you know-astounding stuff. When I first heard it, I said to Brian, “Who’s that?” “Robert Johnson”. I said, “Yeah, but who’s the other guy playing with him?” Because I was hearing two guitars, and it took me a long time to realize he was actually doing it all by himself.”

“To me Robert Johnson’s influence-he was like a comet or a meteor that came along and, BOOM, suddenly he raised the ante, suddenly you just had to aim that much higher. You can put the record on now, and it’s as fresh and interesting as the first day you heard it. Everybody should know about Robert Johnson. When you know about something, and comperatively few other people know about it, that’s a crime in a way; you’ve got to do what you can to tell people, “Hey, check this cat out. Because you’re in for something extra in your life.” You want to know how good the blues can get? Well, this is it.”

Of course, the Rolling Stones would go on to record plenty of great renditions of Johnson’s songs. Often times, covers are just a fraction of the original work, but the Stones really put their own spin on, making them wonderful unique listens. These include their recordings of Stop Breakin’ Down and Love In Vain, as well as Keith’s videotaped playing of 32-20 Blues on Youtube, as he sits across from Buddy Guy.

Another lasting influence Johnson had was upon Led Zeppelin. Although they didn’t focus as wholly on Johnson, compared to Clapton or Richards, they did still acknowledge his music. In fact, they helped make famous Johnson’s stanza in Travelling Riverside Blues, “If you squeeze my lemon ’till the juice runs down my leg…” In 1969, Led Zeppelin built a song around this verse, with the Lemon Song on their album, Led Zeppelin II.

Beyond this, Led Zeppelin still felt much influence from early blues in general, with their recordings of songs like When the Levee Breaks and Gallows Pole, which were based on themes from early players such as Memphis Minnie and Lead Belly.

Overall, Johnson’s influence came at a crucial lift-off point for music, in the 1960s. With John Hammond serving as a driver to distribute Johnson’s music to the masses, with the Columbia release of King of the Delta Blues Singers, RJ’s songs steadily flowed into the hands of seminal 1960s figures — Bob Dylan, Eric Clapton, the Rolling Stones, and Led Zeppelin, among others. From those branch-off-points, countless others were then influenced, such that, if you were to pluck RJ from the timeline of music (as if he’d never existed), the flow of music development from the 1960s and onwards would have been quite different.

So what is blues music and where did it come from? It's an influential type of music which originated from West African traditions.

The Belwin's 21st Century Guitar Method is one of the best books you can use to learn guitar. Its method is simple, going through the individual strings, then the chords.

The Easiest Way To Learn The Guitar For Beginners