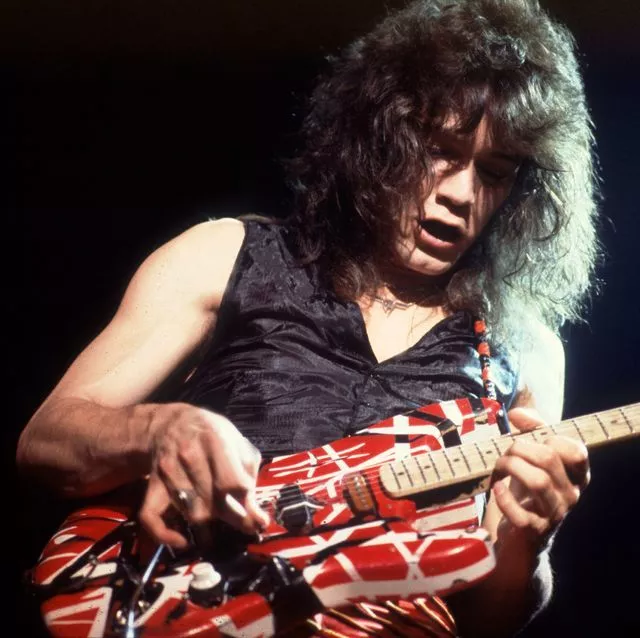 What gets stuck helplessly trapped in unfathomable darkness for countless time? Why, the picks that fall between your sofa cushions.

It’s handy to be ready with a few extra when they disappear, so that’s what this lesson is about. At the bottom, you’ll find two of some of the cheapest pick sampler packages you’ll find on the interwebs.

You might’ve gotten a bunch of picks (also called plectrums) when you got your guitar — they’re the triangular, (usually) plastic pieces which you hold with your strumming hands to pluck the strings.

As a sidenote, you might wonder if it’s better to pluck the strings with a pick or your fingers. The answer? The barrier of entry to using a pick is usually lower, so I’d recommend to start with a pick. Plus there’s more “support content” out there on how to use a pick, rather than with fingers, in case you run into trouble down the road.

With that being said, it’s totally a personal preference, and suffice it to say that Django was one of the greatest ever, and he used a pick, while also Paco de Lucia used fingers, and was also one of the greatest to ever do it. With the right practice, you’ll succeed with either!

If you decide to use a pick, you probably already know that it’s handy to have extras around; they have a notorious tendency to fall between sofa cushions, AKA: transport through a wormhole into another dimension, never to be found again. That being the case, here’s a bit more info on what to look for in future picks you buy, and a wee squeeze-in of humble suggestions on purchase options.

How to Select a Pick

What do you have to think about when choosing a pick? Really, you’ve only got to think about the pick thickness, as you make your purchase. And, it’s 100% subjective — you may prefer a thinner pick, while next month you prefer a thicker pick. It’s like a runner choosing what design of shoe to buy — there’s literally no right answer, apart from your own preference.

You’ll find those pick thickness measurements in millimeters, usually. Coming at 0.5mm, you can expect a pick that fills super thin, and almost “floppy”; with every strum, the pick bends as you push it through the string.

On the other hand, a 1.14mm pick will feel like you’ve got a polished stone in your hands. It’s thick and hardly bends at all, as it unyieldingly makes it way through the strings. One difference that comes to mind with thick picks is that they induce a larger sound from your guitar.

Do you already know what gauge of pick you like? Great! Go ahead and order a few more of those if you don’t already have extra.

Don’t know which picks are right for you (or interested in seeing if you’d like to try a different gauge)? Kind of like an at-home wine tasting, you can order “pick samplers” with a bunch of different pick thicknesses and decide what gauge you like best. Once you know what you like, from then on you can simply pick up a few extra of that thickness each time you visit the guitar store.

What Pick Sampler Should You Get?

Most pick samplers are pretty well all equal — pick brands don’t tend to make a difference (although Dunlop is probably the best known guitar pick brand). All else being equal, you can base your buying decision mainly on price, and these are among the three cheapest which we found at the time of writing this. 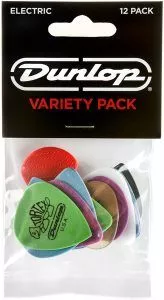 If you mosy into your local guitar shop, chances are the picks they’ve got are Jim Dunlop picks. When it comes to choosing picks, it’s one of those, “if it ain’t broke, don’t fix it” things; Dunlop has made picks that do what picks are made to do for so long that there’s hardly a need to scope out another brand.

And to make the call even easier, they’ve got one of the cheapest variety packs you can find — that being this guy right below. 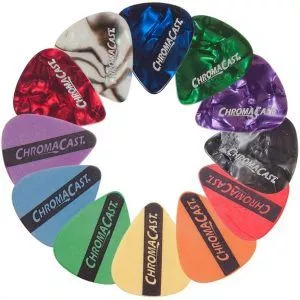 The other most cheap pick sampler is this ChromaCast Pick Sampler. To be quite honest, there’s no real difference between the Dunlop picks above, and this pick sampler below; they’ll both do what you want them to do, which is to introduce you to a whole bunch of pick thicknesses.

These ones are cool and tortoise-shell looking though, so that’s a nice little plus!

Onto the Next Lesson!

That’s about it! Now you’ll have a safe honeypot of picks each time it drops from your hand and teleports to a distant universe. Thanks for reading and I hope this was helpful in some way.

The Best Guitar Learning Software For 2021?