Ever since it first appeared 50 years ago, it’s been used by many famous guitarists and for many different genres.

However, finding the right model for your needs can be a pretty daunting task.

What are the most important features? What makes a wah pedal good?

In this article, I’ll be answering all of the most common questions asked about this type of effect, as well as list and review some of the best models on the market.

So, let’s get right into it!

What Exactly is a Wah Pedal?

The name pretty much says it all. A wah pedal is a type of a guitar effect pedal that alters the signal of your guitar in a way that it sounds like you’re saying “wah-wah”.

As funny as it may seem, there is no better explanation for it!

There are many famous guitarists that use this effect. The most noticeable application of this pedal is probably in funk, as you can hardly find a funk song without the “wacka-wacka” rhythm guitar in the background.

Unlike other effect pedals, a wah pedal utilizes a different interface. Instead of a classic footswitch, there is a swiveling pedal on the top that you can push down on both the front and the back side.

This is commonly referred to as an expression pedal because you have more control over it than simply on and off.

Other Uses for a Wah Pedal – More Than Just One Effect

Because of the previously mentioned expression pedal aspect of the wah, it can be used for more than just the “wah” effect.

Some models give you the ability to control the volume of your guitar or even add a new level of control over other effect pedals you have the wah hooked up to.

This makes the wah pedal a great addition to any pedalboard that lacks space but needs something extra.

However, do have in mind that the other pedals you plan on using your new wah will need to have the appropriate connection for the control function to work.

As this kind of effect is pretty straightforward, there aren’t many different features you can look for, at least in terms of sound.

One of the most important features you should consider when buying a wah pedal is whether it operates in footswitch or auto switch mode.

Footswitch mode means you have to actually engage the effect by actually pressing the pedal all the way down until a switch clicks.

Auto switch mode, on the other hand, means that the effect will turn on once you apply pressure on the pedal, without actually hitting any switch.

While musicians may argue over which of these modes is better, it honestly boils down to your personal preferences and actual needs.

Some models even have the option of toggling between these two modes, so if you’re not really sure what will suit you, that just might be the solution.

A Few Other Features

Some models out there give you the ability to adjust the torsion of the pedal, or, simply put, the amount of pressure you need to apply to the footboard to activate/modulate the effect.

Other features may include EQ controls, level, or other fine-tuning options for different parameters.

The bottom line is this: Ask yourself what exactly do you need. A simple wah pedal that does the job, or something extra, with volume/other effect pedal controls?

Now let’s see exactly what each of these models has to offer! 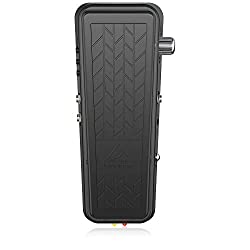 Starting with the least expensive model on our list, we have the Hellbabe HB01 by Behringer. This pedal is well known for its good build quality, excellent sound, and useful features. And all that for around $50!

Even though the Hellbabe is out of plastic, it’s surprisingly durable. Sure, metal would have been a more durable material choice, but at this price point, you can’t really ask for more.

The HB01 utilizes the auto switch feature, which means it turns on as soon as you step on it. This gives you the ability to engage it pretty rapidly, without having to step on it the whole way.

As far as additional controls go, Behringer didn’t cut any corners. The biggest knob is used for controlling the range of the effect, from 440 to 250 Hz, making it suitable for even a bass guitar.

The other knobs are used for fine tuning the EQ and the boost, giving you a wide range of possibilities.

How does it perform?

The actual wah effect is pretty solid. The auto switch feature comes in very handy on stage, with only the lack of precision being the downside of this model.

The Hellbabe HB01 by Behringer is a great entry level wah pedal and a neat and inexpensive addition to any pedalboard! 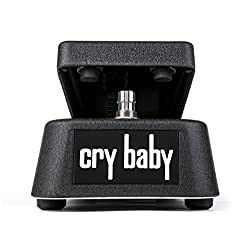 At number 2 we have the classic! The GCB95 Cry Baby is probably one of the most famous wah pedals on the market for quite some time. And here’s exactly why.

You can grab one of these online for under $100. What makes it different than the previously mentioned Hellbabe?

First of all, the Cry Baby is much more solid. The heavy-duty construction makes it noticeably more durable while keeping the weight to a minimum.

While the fact that this model uses the footswitch feature rather than the auto switch may not appeal to some of you, the surgical precision of the actual pedal is definitely worth it. It’s no wonder so many famous guitarists opt for the Cry Baby over so many other, competitor models.

The sound of your guitar will come through this pedal with no change whatsoever (apart from the actual effect), keeping the tone natural and clean.

The Cry Baby is perfect for anything from the ‘80s “wacka” funk rhythm riffs, to emotional solos. Couple the amazing sound with the tour-grade durability, and you’ve got yourself a reliable and longlasting piece of equipment.

All things considered, the GCB95 Cry Baby by Dunlop is probably the best choice for anyone looking for a simple yet powerful wah pedal with no extra bells and whistles. 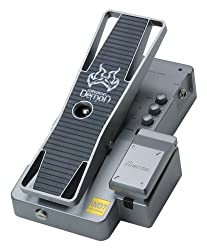 The WD7 Weeping Demon by Ibanez is one of the more interesting models you can find when looking for mid-range wah pedals.

At first glance, this model may look more like a bass drum pedal than an effect pedal. The industrial-like design is definitely appealing, but more importantly, gives this model great durability and a very solid and premium feel.

What really sets the WD7 apart from most other models is its ability to toggle between footswitch and auto switch mode. The first mode utilizes a small additional footswitch on the right of the expression pedal as the on/off switch, and the other allows you to simply raise your foot once you’ve done with using the effect.

The mentioned switch is also used for choosing the actual frequency range of the wah effect. Other controls include 3 knobs for adjusting the output level, Q (resonance frequency), as well as the low-frequency cutoff point.

But Ibanez didn’t stop there. You can customize your sound even more with 2 extra knobs that control the frequency limits and the fade time of the effect when the pedal is used in the auto switch mode.

The WD7 is the go-to choice for any guitarist looking for a versatile wah pedal that they can tinker around with. 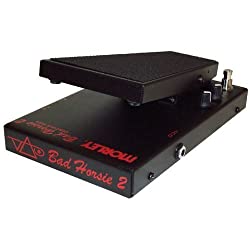 A bit more expensive than the WD7, we have the Bad Horsie 2 by Morley. While this brand may not sound familiar to some of you, Steve Vai definitely should.

This signature wah pedal not only looks good but performs nicely as well.

Unfortunately, there is no option for switching between switch modes on this model. However, the auto switch feature, coupled with the amazing precision of the expression pedal makes for an absolutely wonderful user experience.

Morley included clear tone technology in terms of the buffer circuit, ensuring that the unique and natural tone of your guitar comes through the amp.

As far as the controls go, the VAI-2 is pretty simple. The 2 knobs control the frequency of the effect and the level in the mix. An additional footswitch is used for toggling between the 2 modes, the first one being your classic Steve Vai Bad Horsie preset.

The other mode is a contour regime which gives you the possibility to shape and form your own unique sound.

Whether you’re a fan of Steve Vai, or simply need a solid and versatile wah pedal, definitely consider the VAI-2 Bad Horsie 2 by Morley. 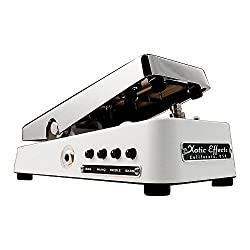 And finally, at number 5, we have the priciest wah pedal on our list, the XW-1 by Xotic Effects.

For just under $250 you get a very well built pedal that, with its controls and features, focuses on flexibility and not just great sound quality.

The XW-1 is noticeably smaller than most other wah pedals, which makes it a great choice if you’re already running out of space on your pedalboard.

It’s the controls and performance of this pedal that really set it apart from other models. The expression pedal movement is incredibly smooth, allowing you to express the finest details of the effect while you’re playing.

The signal is, as expected, amazingly clean and natural, without any noise or crackling.

You can easily adjust the torsion of the pedal as well as the travel range for an ultimate sense of comfort.

With 4 knobs on the right side, shaping your sound is very simple.

You’ve got bias, Q, treble, and bass. Bias gives you either more output and stronger lows, or a more transparent and clear sound, while the other controls are pretty obvious and self-explanatory.

If you’re looking for a top of the line wah pedal with a decent number of parameters to play around with, look no further than the XW-1.

As with any piece of musical equipment, it’s really up to you to find what works for you and your needs.

My personal pick would have to be the Ibanez WD7 Weeping Demon.

It’s versatile, offers both switch modes as well as parameter control, and simply feels solid. Sure, there are more expensive models that may sound more natural or crisp, but in terms of the quality you get for the money spent, the WD7 is, in my opinion, as good as it gets.

I sincerely hope you found this article helpful.

Thank you for reading and I’ll catch you in the next one!

Which Artist Was Known As the Father of the Blues?

You may wonder, which artist is known as the father of the blues? Many would say Charley Patton, W.C. Handy, and Lead Belly among others.

The Best Guitar Capo For Your Playing Style