Sure, a clean guitar tone can sound pretty good. However, there’s hardly a better sounding effect than the crunchy and electric overdrive and distortion.

While most amps out there already provide you with this effect, it’s often at an average level.

With effects pedals, you can really shape your sound and give it that unique flavor you were looking for.

There are loads and loads of various different overdrive and distortion pedals on the market. If you’re not really familiar with this kind of equipment, finding the right one for your needs can be pretty tough.

Fret no more, as we will go over the basics, as well as some of the best actual models of OD and distortion pedals you can get!

What to Look for When Buying an Overdrive/Distortion Effects Pedal?

The difference between overdrive and distortion

While overdrive and distortion are somewhat similar effects, there are still some notable differences you should have in mind.

First of all, you can look at this kind of effect like a spectrum.

At one side, you have Overdrive, which is the “softest” type of this effect. It’s the tone you get from a tube amp when you turn the gain and volume past a certain point.

You can still hear the natural sound of the guitar behind the gritty tone, so it’s perfect for genres of music that are not that heavy.

Distortion is in the middle, as it’s a combination of a saturated sound and the natural tone of the amp and guitar. Think metal and rock, and that’s what distortion is all about.

Fuzz is at the opposite side of the spectrum, and it completely saturates the signal. The name pretty much describes this effect, as it’s very fuzzy and crackling.

So, it’s pretty much up to you and your personal preferences. While certain genres and playing techniques tend to utilize specific types of this effect, there really aren’t any real limits.

Now that you have a better understanding of the differences between these types of effects pedals, we can take a look at some of the most important features.

Level of Controls and Parameters – Match Your Skill Level

Much like there are amps with just a couple or a bunch of knobs, you can find pedals that are either pretty minimalistic or have a bunch of parameters for you to play around with.

If you’re just looking for a simple distortion pedal and don’t really want to experiment much, going with a straightforward, minimalistic one is fine. They are usually pretty inexpensive as well.

But, having a wider spectrum of options when it comes to shaping the effect obviously gives you a wider range of different tones you can use.

Once again, ask yourself what exactly are you looking for.

Pedals utilize either a wall adapter or your simple 9V battery in order to get the needed juice.

However, not all models offer both of these options.

While both using the battery and the wall adapter have their own pros and cons, getting a pedal that’s versatile and can go either way is probably your best bet.

How Much Money Should You Spend?

As with any piece of musical equipment, the more you spend, the higher the quality is, both in terms of build and sound.

However, that’s not to say that models on the cheaper side aren’t good!

As a beginner, chances are you’re not going to be able to differentiate the subtle differences in the quality of the effect you’re getting.

As always, I’ve chosen 5 different models, with varying capabilities, levels of control, and, for some, probably, most importantly, price.

This way, you can be sure that even if you’re on a somewhat tight budget, you’ll be getting the best bang for the buck!

Reviews of the Best Effects Pedals for Overdrive and Distortion 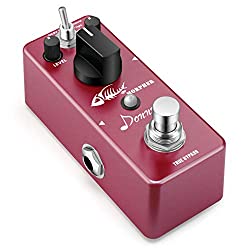 While Donner may not be as popular as MXR, Boss, or Electro-Harmonix, their effects pedals have been the go-to choice for many guitarists that either don’t want to or can’t spend a lot of money on pedals.

The Morpher Distortion Pedal offers a pretty solid performance while not taking too much space on your pedalboard.

First of all, let’s take a look at the design. It’s pretty clear that this model is what you would call a mini pedal. It’s pretty petite, but manages to cram all the necessary pots and switches on the top side so it’s still easy to use.

The main knob controls the overall gain, while the level and tone are adjusted via the two smaller knobs above it.

A handy switch between the two smaller knobs is used for toggling between the 3 available tone presets, which include natural, tight, and classic.

How does it sound? Well, it’s pretty darn good considering the around $30 price tag. The focus is mainly on the mids, making it great for old school rock and metal. For other, more modern genres, it definitely lacks the low-end punch.

So, is the Morpher worth buying? If you don’t really want to spend a lot of money and are a fan of the ‘80s distortion sound, sure! 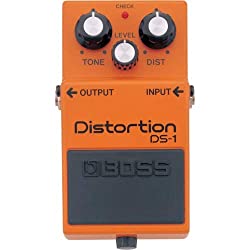 Boss is one of those brands that really doesn’t need an introduction. Their DS-1 distortion pedal is one of the most commonly used effects pedals, both by beginners and more advanced guitarists, and here’s exactly why.

While the orange color may make it look like it’s on the cheap and flimsy side, the DS-1 is pretty durable and sturdy.

As for the interface, it’s pretty similar to the previously mentioned Morpher by Donner. Simple and minimalistic, it does the job without any unnecessary bells and whistles.

The knobs are used for controlling the tone, level, and distortion, and feel very precise.

However, it’s the actual performance in terms of sound that really makes this pedal shine. The versatility it provides is phenomenal, considering the relatively limited controls. You can get anything from a subtle overdrive to an aggressive distortion, just by playing around with the controls.

As the DS-1 manages to retain the natural sound of your instrument, it can easily be used with a bass or even keyboards, making it much more than a simple guitar effects pedal.

If you’re looking for a solid yet inexpensive distortion pedal that you can use for a variety of different genres, the DS-1 is one of the best models you can get. 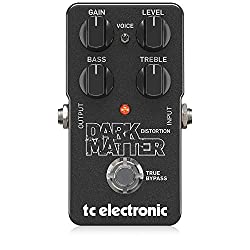 With the Dark Matter by TC Electronic, we’re still in the around $50 price range, and boy, can you get a mean distortion effect with this model!

The form factor is still pretty compact, but the Dark Matter packs quite a punch. The all-metal body not only feels solid but can take a beating as well, ensuring that this pedal will last you a long time.

Control-wise, you get more options than with most other competitor models. Besides the gain and level knobs, you also have the ability to adjust the levels of bass and treble, giving your tone that extra depth or a cut, depending on the circumstances.

With that in mind, you can really set up any kind of distortion effect you may want. Play the Dark Matter through a tube amp, and it really shines through, letting your guitar do the talking, and modulating the sound either slightly or completely.

Personally, I find it to work best for genres such as classic rock or jazz and blues, if not turned all the way up. Metal sounds great too, if you’re not looking for too much gain.

The Dark Matter distortion pedal offers a unique blend of overdrive and distortion effects in a very convenient and durable package. If you’re looking for a sweet yet powerful tone, definitely consider getting it. 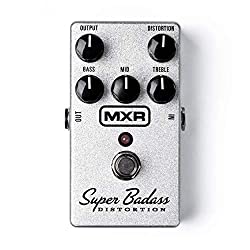 If the previously mentioned models just don’t cut the cake for you, take a closer look at the M75 Super Badass Distortion by MXR!

For around $100 you’ll be getting a pretty badass distortion pedal, as the name itself suggests. But what makes it so special?

You can tell by its metal colored body that the M75 is all about performance, not really caring about the design. With slightly larger dimensions come the additional controls that allow you to get that tight and sharp tone you’re looking for.

The distortion pot is used for tuning in just the right amount of gain in the signal, and the output knob controls the blend between the wet and dry signal. This way, the natural sound of your guitar can either dominate the tone or get masked by the gritty effect.

The M75 is known as one of the best sounding distortion pedals for metal guitarists. This is mainly because of the gain it provides, as well as the 3 band EQ knobs you can use to shape your tone to the finest details.

Basically, you’re looking at a very aggressive tone, rich with gain, that you can easily tame and use both for solos and riffs.

The name pretty much says it all, it’s pretty badass! As I’ve already said, when it comes to metal, the M75 by MXR is your go-to distortion pedal without busting the bank. 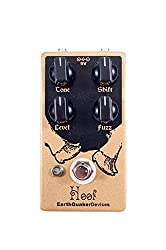 While there are definitely great models coming from well-established brands, from time to time I like to take a closer look at less-known companies, and what they have to offer.

EarthQuaker Devices is one of those brands, and their Hoof distortion/fuzz pedal is simply so unique, I had to include it in this review.

Though it is mainly a fuzz pedal, the Hoof offers a pretty versatile set of different sounds. This is an updated version of the old-school model that has first appeared a couple of decades ago.

Control-wise, you’ve got fuzz, level, tone, and shift. This means you can go for somewhat of a discreet yet still pretty electric distortion, to a full-on crackling and static-rich fuzz. The shift knob is used for tuning in different frequencies for the treble, while the lows and mids remain balanced.

Although you don’t have the ability to adjust the EQ, the Hoof handles the lows very nicely, basically giving you loads of bass, while still letting the organic sound of your particular guitar cut through.

So, if you’re looking for a unique distortion/fuzz effect, that gives you loads of low end to play around with, definitely consider the Hoof!

As you’ve had the chance to see, there really are very different distortion and overdrive effects pedals out there.

However, if I had to choose one from the previously mentioned models, as a favorite, it would have to be the M75 Super Badass Distortion by MXR.

The sheer power and versatility it provides makes it more than worth the money. While it mainly focuses on metal, it can still be used for many other genres if you just tone it down a bit.

That pretty much wraps this article!

I hope you had fun reading it, and that it was helpful and informative.

As always, thank you for reading, and I’ll catch you in the next one!

The Best Pedal boards For Guitarists: Unlock The Next Level

How To Learn Guitar From Home – Save Time And Money