BY LEARN GUITARS
Last Updated On:
October 2, 2022
HomeBlogBest Guitar Amp for Home Use | 6 Amps That Won’t Break the Bank 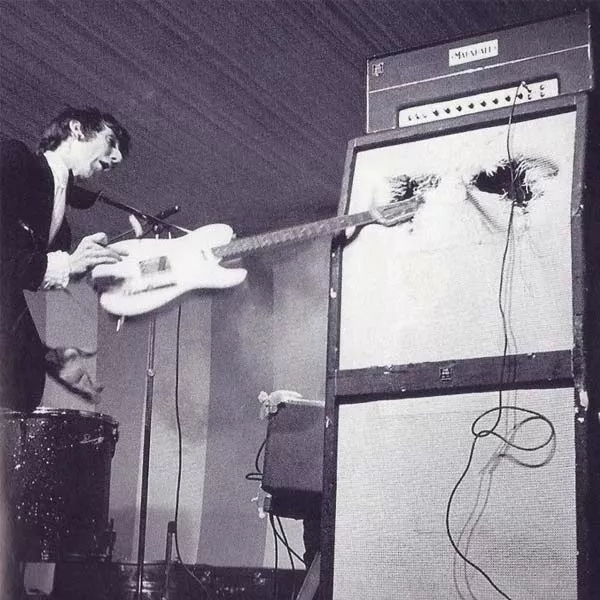 Your main decision is whether to get a tube amp or a solid-state amp. One’s pricier but tonally juicy, and the other’s more resiliant though has a more uniform sound.

If you like playing with effects, then you might be want to get a modelling amp. Reverb is always a plus, and you won’t complain if your amp has some nice reverb, so do look out for that.

You’ll be happy with a Fender Blues Junior, if you tread down the tube amp path, and if you’d like a solid-state amp the Roland JC-22 will leave you searching for your jaw on the floor.

Through the fog of devil’s lettuce, all you could see near the ground were swarms of bell-bottoms. The year was 1976, and The Who were playing Charlton Athletic’s football ground in London; 75,000 people – who didn’t know their faces would melt that night – packed the stadium.

Indeed, that evening, The Who set the world record (which would stand for 8 years) for the loudest concert ever. The volume was 126 decibels measured 100 foot away, and through torrents of rain.

Your Next Step: Getting Volume Out of Your Guitar

You’re feeling cool, I get it; you’ve got your electric guitar and you’re rearin’ to separate tectonic plates with sound.

But hold the phone — you’ll need to grab an amp.

As you hone your skills like an ancient imperial Kung Fu master in the hills of Quanzhou, you’ll need a trusty practice amplifier for your dojo.

Ultra quickly, let’s go over a few knick-knack pieces of information you should know about amps.

a. Combo Amps vs. Heads & Cabinets

First, you’ll decide whether you’ll get a combo amp or a head-plus-cabinet. As the name suggests, combo amps have the speaker & controls (volume, tone, etc) for that speaker all-in-one package; heads plus cabinets are, on the other hand, split in two.

If you want convenience, and you won’t be playing a room that fits 1,000 people anytime soon, then get a combo amp. These days, they’re pretty powerful puppies, and involve less cables (to connect the controls & speaker), so they’re great for the person who just wants to focus on learning the guitar. In fact, a lot of the greats record with a small combo amp mic’d up, and perform with a combo amp mic’d to a room’s speaker system.

On the other hand, if you’re looking for the sonic strength of the stars, then look into a head plus cabinet. You’ll be like Pete Townshend creating seismic vibrations within a 10km radius.

Next, you’ll want to know whether to use a tube or solid-state amp. Don’t worry about the science of it all; basically, tube amps use cool vacuum tubes that warm up to make all the electricals of the amp work, and solid-state amps don’t.

The cons of tube amps is the tubes are fragile and expensive, and the amps tend to be more expensive in general. Plus they usually need to be played louder to reap the tonal benefits. So why ever use a tube amp? Well, they deliver that “juicy”, thick tone, which you’ve no doubt heard in the likes of Clapton, Hendrix, and Stevie Ray, which is priceless.

On the other hand, you might want a solid-state amp if you’re planning on playing in a quiet, practice environment (where tube amps wouldn’t be “activated” enough since it would be so quiet), or if you’d like a very uniform tone like a jazz musician; Joe Pass used to use solid-state amps. Also, solid-state amps are more affordable, and hardly ever need repairs, which is always a plus.

As a quick sidenote on wattage…

For anything less than playing to 50 people or in your practice room, you can feel free to stick with 20W or less.

Most beginner guitarists are quick to think that they need 100W or more of power when choosing their first amp.

But here’s the kicker:

Even for gigs at smaller venues, 100W may be too much!

You should actually be looking for amps with up to 20W of power, max.

Even 3 watts will do just fine for your home practice sessions.

Not only are you wasting money by getting a much more powerful amp, if it’s only for home use, but it also has to do a lot in terms of the actual sound.

With a big, powerful amp, you can only turn up the volume slightly. This means that both the tone and volume are going to be pretty weak.

Playing at lower volume levels is much better with a less powerful amp, as it can push through a good tone at a wider range of settings.

What’s the bottom line with tubes vs. solid-states?

Well, depending on your personal preferences, going with any of these types can be a good idea.

If you’re looking for an amp that delivers natural sound, and don’t really care about effects, a tube amp is the way to go, if you can afford one.

Modeling amps are great with experimenting with a wide variety of different presets, amp sounds and effects.

Solid-state amps fall somewhere in the middle, as they too can offer a decent number of effects as well as a pretty natural sound.

So, think about your playing style and musical taste and choose accordingly!

Lots of people will buy a certain amp simply due to its irreplaceable reverb.

By cranking the reverb, you’ll sound like you’re at Carnegie Hall, or in Dracula’s palacial boudoire. The quality of the reverb is a good decision-maker if you’re stuck between two amps.

Oftentimes, amps will have built in distortion. More than likely you want this; it makes it so that you don’t have to spend a million dollars on Tube Screamers, and other overdrive pedals — everything’s neatly packaged in your sound box.

If you’d like to stick with a clean sound though, to listen to how your practice is coming along, or because the music calls for a nice, clean tone, no worries — practically all amps have a clean tone. You might even find your amp comes witha footswitch for “channel switching” — AKA, switching between the amp’s clean & “dirty” channels on the fly, as your fingers are busy fretting Free Bird.

e. Modelling Amps: Making Your Amp a Chameleon of Sound

Occasionally, you’ll find digital modelling amps that use digital processors in order to simulate the sound of various different models, whether they’re tube or solid-state amps. Usually, this is great for home practice, when you’d like to momentarily be like McCartney on Taxman, or Hendrix on Voodoo Child. Though, you might get some flack since audiophiles spurn the digital flavoring of these amps, instead preferring analog equipment (in other words, they’d rather create the sounds naturally through the original equipment). You’ll notice that they don’t quite fully capture those vintage sounds, but it could be a worthy tradeoff for you if you want tons of different amp models at your fingertips.

f. The Guts of an Amplifer… the Speakers

What about the actual meat & cooked potatoes of the amps — the speakers? Well, the quick and dirty is that smaller speakers produce better top-ends, while larger speakers produce better low-ends (which is why tweeters are small, and woofers are big). So you’ll find that a 10″ speaker might have that ideal squeal, while a 15″ speaker, woofs like your deep-voiced 3rd cousin.

Also, like shelves in your kitchen cabinet, speakers are housed in the speaker cabinet, and that cabinet can be sealed (AKA “close-backed”) or left open to the breeze (AKA “open-backer”). As you can imagine, either produces a different sound, with the open-backed being a smidge brighter and shriller.

For instance, dudes of the ol’ blues tend to swear by old, open-backed 4×10″ Fender amps, since the tone sizzles like prime rib on a sweaty Saturday afternoon. As you can tell, 4×10″ means there are four 10″ speakers in the cabinet. For your reference, a 100-watt head might plug into one or two 4×12″ cabinets.

Now, For the Main Event

The key thing is to get a guitar amplifier that encourages you to practice. Something that is easy to setup. It also needs enough bells and whistles to make you excited to play, and is yet cheap enough that you can buy it with pocket change.

Do leaf through the interweb resources for this purchase. Personally, I always love Reddit for organic, genuine answers, like Googling “reddit best home amplifier”. You don’t get tangled like a helpless fruitfly in the web of industrial talking heads trying to sell you stuff online.

Though, to make it easier for you, I’ve gone ahead and listed a few amps, on the tube and solid-state side, which you can’t go wrong with. Hope these suggestions help!

You’re one step closer to being Pete Townshend at Charlton Athletic’s football ground; I know it’s been a while since you probably read that music history story — see the top of this ol’ page for the reference…

Once you’ve decorated your musical dojo with your newest amplifier, pop over to the next lesson: here. Like a Shaolin master with his nun-chucks and battle axe, you’ll select your accessories needed to begin the hike up the mystical mountains of the guitar.

Or, still interested in amps and wanna do a side quest? Strat players far and wide, listen here and discover the perfect amplifier pairing for your strat. Also, to those who like to funk, we salute you with these amplifiers built to complement pelvic James Brown thrusts and thick, 70s sunglass frames.

The Best Guitar Strings For Metal – Get The Best Sound

Ukulele Sizes – All 6 Types of Ukuleles