Among the most well-remembered blues musicians, Son House's haunting music continues to influence musicians today. As a member of the legendary group of Dockery Farms Delta musicians, with contemporaries such as Charley Patton, Willie Brown, Tommy Johnson, and a young Robert Johnson, Son House laid his roots early on, recording in 1930, and continued to play into the 1970s. 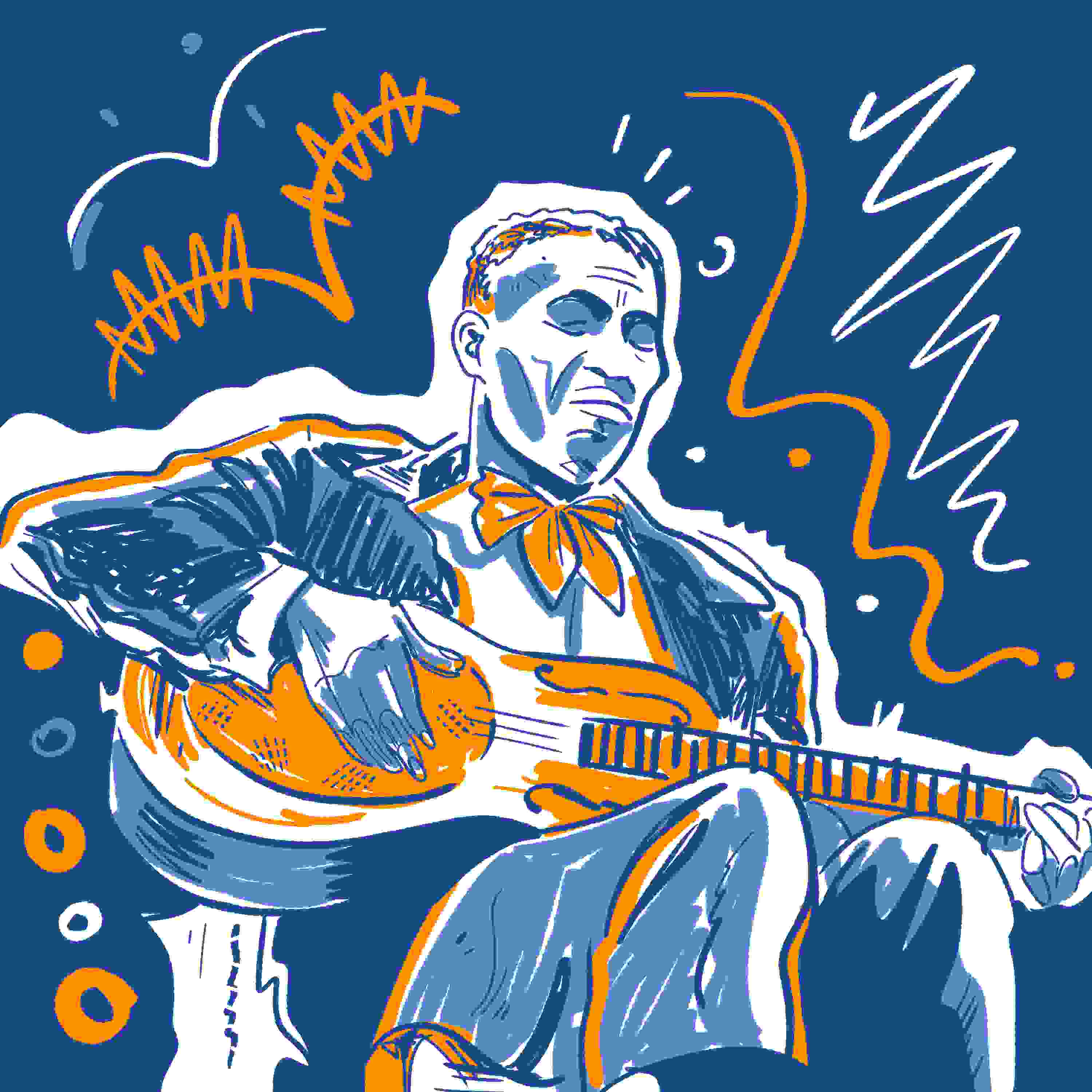 Am I Right Or Wrong
Am I Right Or Wrong isn't so much a Son House blues tune, with a different type of chord progression and almost more of a folk/country styling to it
American Defence
A great display of Son House's guitar feel and style, played in Standard tuning. It's quite a one-off from Son House's repertoire — a waltz that's a non-blues
Clarksdale Moan
Here's an interesting tune from Son House, featuring his fingerstyle playing, but without any sliding. He bases the song off of just a few simple fretted moves
Depot Blues
This is one from Son House’s Library of Congress recordings made in the early 1940s with Alan Lomax; a session with great songs including Jinx Blues Pt 1
Dry Spell Blues
One of the first songs Son House ever recorded, back in 1930, the guitar work in the song captures the strong essences of House' slide playing in particular
Low Down Dirty Dog Blues
Low Down Dirty Dog Blues is a display of Son House's Spanish tuning playing, which definitely seemed to be what he was most comfortable with using the slide
My Black Mama
Son House features his catchy, riff-based style, which uses sounds that are recognizable from other recordings, like his 1960s takes on Death Letter Blues
Preachin’ The Blues
Like Robert Johnson's later recording of Preachin' Blues, this recording is in Vestapol tuning. It has a beautiful simplicity and rhythm to its main riff
Special Rider Blues
Alongside songs such as Death Letter Blues, Special Rider Blues is a seminal recording, showcasing Son House's powerful Spanish tuning guitar style
Special Rider Blues (Test)
Here's a recording which was captured by Lomax, presumably to test the functionality of the equipment prior to playing the "actual" Special Rider Blue
Walkin’ Blues (Death Letter)
Although this song was intially recorded with the name "Walkin' Blues" as the main title, it's an early version of Son House's Death Letter Blues
Walkin’ Blues - Son House
A great Son House song, not just musically but historically. Accompanying him, you hear the legendary Willie Brown on rhythm guitar, strumming out the chords
Death Letter Blues
Preaching Blues
To learn how to play Son House's version of Preaching Blues, check out this lesson, which is based on a 1967 video recording of Son House

One way of seeing Son House's guitar playing is actually just by listening to his apprentice, the younger Robert Johnson. Just listening to Son House's 1930 recording of Walkin' Blues, it's nearly note-for-note the intro which Johnson would later play on his classic Crossroads. Differences include that Son House's version is at a slightly lesser tempo and has a 'weightier' / heavier back-beat pulsing throughout. Also, on his recording such as Jinx Blues Pt. 1, that descending bass riff is just like what Willie Brown used on Future Blues. Just by seeing these couple examples, it's clear how that tight circle of Dockery alums pollinated each other's playing.

In the 1960s, Son House's guitar playing did not feature quite the same precise picking patterns and note selections of his earlier 1930 to 1942 recordings, however they still show the strength with which he played. In the many videotapes of his 1960s performances which luckily survive, House often plays a steel resonator, with a hypnotizing right hand strumming alongside wailing bottleneck slides and heavy bends.

Born just a couple miles from Clarksdale, Mississippi, in Riverton, Son House was born to a family with 17 children. Though, soon after, he moved to Tallulah, Louisiana at age 8, due to his parent's separation. Adapting to changes such as these, House soon became facinated by Sunday services he would attend. It wasn't long until his main aim at age 15 was to become a Baptist preacher. For the rest of his life, he'd have to balance his passion for religion with his indulgence for blues and a more Bohemian lifestyle.

In his 20s, Son House became inspired by musicians such as Willie Wilson and taught himself the guitar. Moving back to his hometown near Clarksdale, House had the opportunity to mix with the burgeoning blues scene of the time, playing together with contemporaries like Charley Patton, Willie Brown, and Leroy Williams. After brushing with the law around 1928 to 1929, shooting a man in self-defence, House attended the legendary Parchman Farm prison. Luckily he only had to serve for those 2 years, though was pushed to leave Clarksdale. Deciding to settle in Lula, Mississippi, nearby, he joined Charley Patton, who'd been similarly exiled from Clarksdale & Dockery Plantation around 1929 to 1930. Soon after, in 1930, House recorded for Paramount Records, supported by Charley Patton who vouched for him. The years that followed were mostly subdued, apart from another recording session with Alan Lomax from 1941 to 1942.

As with many pre-war blues musicians, the 1960s' Folk Revival gave a rebirth to Son House's musical career. Having lived in Rochester, New York since 1943 and working for New York's Central Railroad, he had no idea that his music was suddenly gaining popularity through his recordings' re-releases. New calls kept ringing, which led him to play such festivals as the Newport Folk Festival in 1964, the New York Folk Festival in 1965, a European tour in 1967 with the American Folk Festival, and more European touring in 1970.

Ill health, exacerbated by a life of excess when it came to liquor, crept up on him in the mid-70s. Moving to Detroit, Michigan, he remained there until his death in 1988.