With that unmistakably eerie styling of his singing, guitar playing, and piano playing, Skip James was really only "Skip James" for the final 5 years of his life. After being located in 1964 in the midst of difficult circumstances by John Fahey, Bill Barth, and Henry Vestine, Skip James promptly began performing at folk festivals and shooting the video content which can found throughout the internet today.

His guitar playing has a kind of rough, jagged-edge styling, which fits the themes of his music like a glove. In addition to his 1931 recordings for Paramount, his more voluminous body of work comes from his final years in the 1960s. 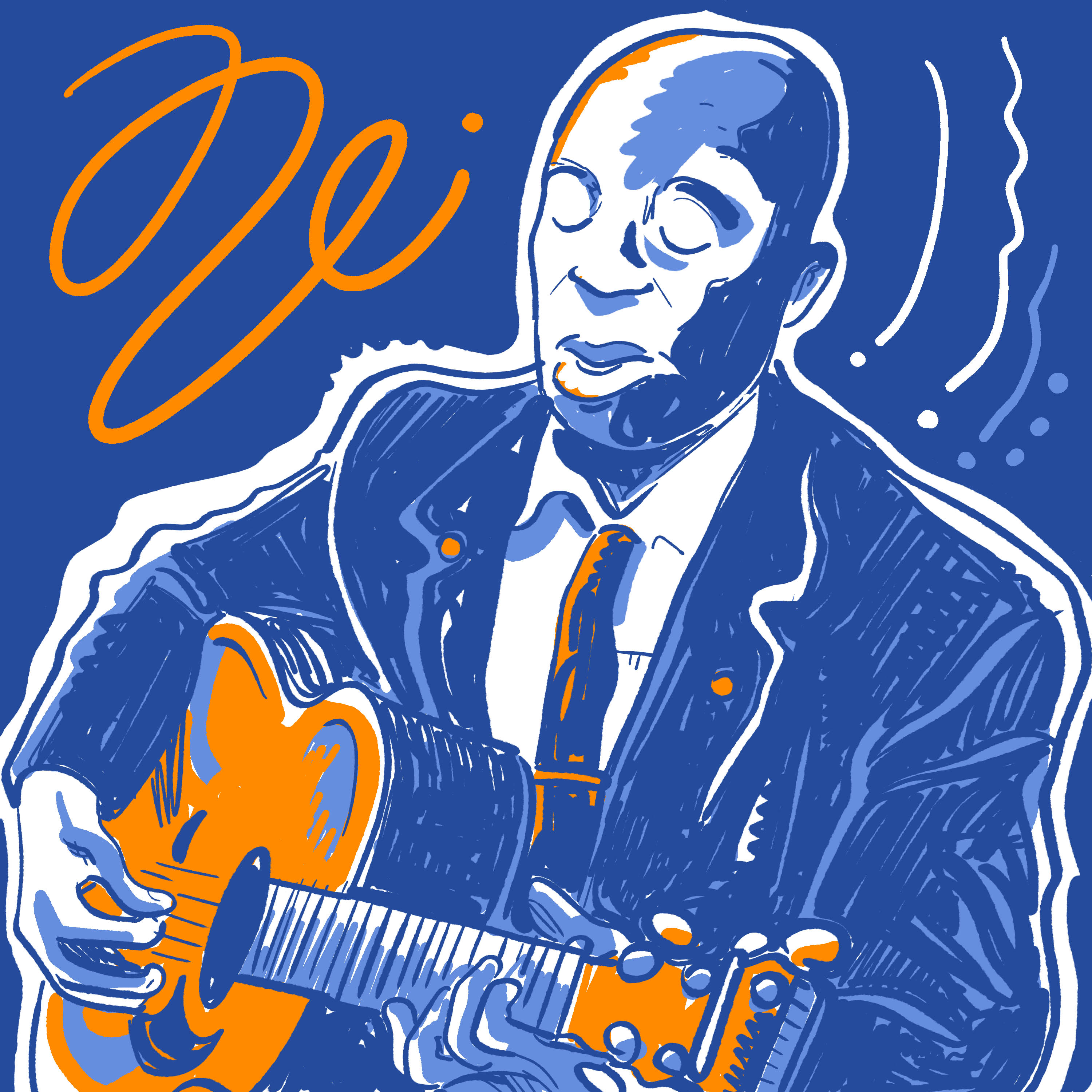 Devil Got My Woman
Crow Jane

Adding to the dark themes of his music, Skip James was notably one of the few users of "Crossnote" tuning, which is essentially just Vestapol Open D tuning, except that the 3rd string is a semi-tone flat; that way, the default chord when the 6 open strings are strummed is a minor chord. With that being the case, you can just think of Crossnote tuning as a cool name for tuning your open strings to a minor chord.

I won't be able to do nearly enough justice to describing & analysing James' playing, but he's certainly got a signature "beat" or "feel", almost like a rocking chair easing back slowly or speedily. Out of that kind of rhythmic feeling, he plucks fingerstyle notes in a kind of jagged & loose way, which seems to fit his sinister styles. On tunes like Hard Time Killin' Floor, he'll pluck some single-stringed, accented notes, and then ease back with melancholy strums; then, on quicker tunes like I'm So Glad, he busts out his quick-picking chops, fretting shapes that dispose themselves well for rapid-fire picking.

Not a whole lot is known about Skip James' earliest years; he was born nearby Bentonia, Mississippi, and was raised by a father who - early on - made a living via bootlegging but turned a new leaf and became a preacher. Throughout childhood and his teenage years, he became more and more steeped in the music flowing around him; learning guitar from a man named Henry Stuckey, and playing alongside Charlie and Jesse Sims, James seems to have steadily amassed early musical experiences.

As he grew to support himself, James worked in various manual labor jobs; for example, he picked up road construction work, and levee-building work in Mississippi throughout the 1920s. During this period, however, he seems to have kept up his musical prowess, based on how he was preparing a normal repertoire, including Illinois Blues, which he'd later record.

Those scratchy older recordings of Skip James spawned from his 1931 audition to H.C. Speir, a Caucasian businessman who, working out of his Jackson, MS record store, recommended recording prospects to Victor, Paramount, Vocalion, Okeh, and other labels. For example, Speir helped to schedule recording dates for Blind Joe Reynolds, Geeshie Wiley, Charley Patton, Son House, and Robert Johnson. Thus, later in 1931, James recorded his famed versions of 22-20 Blues, Devil Got My Woman, Hard Time Killin' Floor, and I'm So Glad. Though, times were tough, record sales were poor, and James abandoned his musical ambitions, returning to helping his father run the family church.

Even though James' 1930s recordings were quite rare, three young individuals (John Fahey, Bill Barth, and Henry Vestine) were entranced by the music they heard, and set out upon finding Skip James. Eventually, they tracked down a beleaguered Skip James, in a hospital bed located in Tunica, MS. In his book, How Bluegrass Destroyed My Life, John Fahey writes in more detail about the situation which brought Skip James to that hospital, and how he surmises it later influenced his personality.

For those remaining 5 years of James' life, Skip James finally enjoyed the fruits of his labors, appearing at the Newport Folk Festival and recording for various labels. In 1966, the band Cream released a version of James' I'm So Glad, which paid $10,000 in royalties to him. In just a few years, though, he passed away in 1969.