Perhaps having one of the most unique guitar styles of all acoustic blues musicians, few (if anyone at all) have emulated Robert Pete Williams' style. Possibly, this is as much due to his obscurity as it is due to the complexities of his playing.

Hailing from Louisiana, and of the same generation as others such as Robert Johnson, Williams actually didn't record during the pre-war blues era. Though, he did perform regularly in his local communities at Church gatherings and dances. It wasn't until much later in his life, 1959 and onwards, that Williams properly and deservedly recorded his music. Fortunately, during this post-war period of his life, he recorded quite extensively, so many wonderful recordings of his live on for all listeners to enjoy. 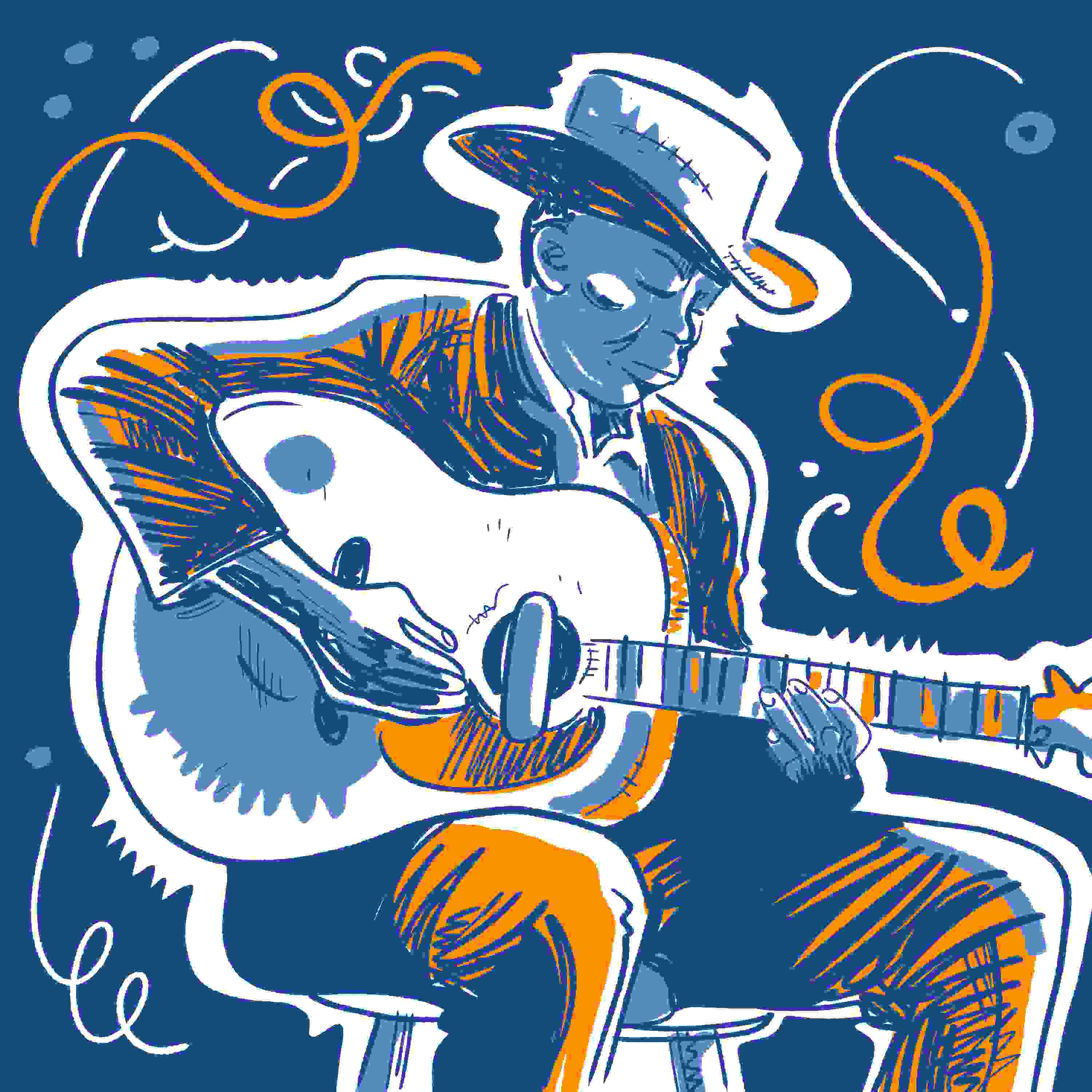 Almost Dead Blues
Much darker than Free Again or I've Grown So Ugly, Almost Dead Blues tingles the spine with Williams' haunting vocal and guitar performance
Free Again
Starting with the first few seconds, an immediate impression of Williams' excited energy shows, eager to tell the song's story as if you're a special audience
I’ve Grown So Ugly
Williams stays within the upper range of the guitar on this one, novelly using the 4th and 3rd strings as the bass notes, only straying during the turnaround
Poor Bob’s Blues
Upon first listening to Poor Bob's Blues, it sounds simple — yes he seems to have these chicken pickin' motions in the works, but still it seems conquerable
Thumbin’ A Ride
Here's quite an interesting song again from Robert Pete Williams, which displays his inventive fingerstyle playing alongside rhythmically intense backbeats

Upon hearing a song such as Free Again, it's apparent that there's perhaps been no other player who sounds like Williams. Curve ball ghost-notes are masterfully played, wonderful and fat notes are tastefully bent, and the notes played are grounded in nasty funk; all the while, this brew is played with an unstoppable beat and awesome ease.

Typically, each of his songs have a kind of "kernel" riff; a simple note pattern, off of which the song gets formed. From there, he adds a tasteful bend, changes up the note sustenance, throws in a ghost note or two, and so on. Then, he repeats this process over and over as the song continutes. Out of this process, that core kernel soon becomes a kaleidoscopic array of funky tones, sounding like multiple guitars at once.

His songs have an almost hill-country like feel, with the freight-train like rhythm that flows through each tune, yet it has more of a jagged style. Although he was influenced early on by the likes of Peetie Wheatstraw and Blind Lemon Jefferson, Willliams' style is clearly his own, with few (if any) guitarists daring to emulate him, even decades later.

Similar to many of his contemporaries, Robert Pete Williams was born to a family of sharecroppers. Zachary, Louisiana was his the town of his birth, and he would continue to live around Louisiana for all of his life. Having no formal education, Williams picked cotton and cut sugar cane like his parents. In search of different work, he moved to the outskirts of Baton Rouge (Scotlandville, Louisiana) at the age of 14, working at a lumberyard. He would continue this through his teenage years.

A transformation came at the age of 20, when Williams fashioned his own homemade guitar, attaching five copper strings to a cigar box. In his own words, he recalled the following in 1975.

Known as pioneers of Louisiana Country Blues, Williams was taught by Robert and Frank Metty (who unfortunately did not leave behind their own recordings). From local gatherings after Sunday church, to suppers, to dances, Williams began to play extensively. As he said, "white folks started having me play at their parties. I got to rappin’ good with the guitar". At this early time, chief influences included Blind Lemon Jefferson and Peetie Wheatstraw; apparently, he was already able to play all of Peetie Wheatstraw's songs, and he played them so often that people would call him Peetie Wheatstraw!

Perhaps as some relief to fellow guitarists, hoping to also get to Williams' level of prowess, although in the 1940s he practiced for a couple months on end, he'd also go on fairly long break, sometimes not playing guitar for as long as six months.

Continuing in this vein until the mid-1950s, Williams' life changed in 1956. He fatally shot a man at a club, claiming it was in self-defense. Regardless of the truth, it was not favourable to be an African-American in the south, having committed this act. Thus, he was sent to the notoriously brutal Angola State Prison (where Lead Belly had also served). Fortuitiously, in 1958, LSU folklorist Dr. Harry Oster paid a visit to Williams, soon bringing him a 12-string guitar with which to cut his first recordings. Later issued as Angola Prison Blues, Those Prison Blues, and Angola Prison Spirituals (on the Arhoolie label), Williams was finally a recorded blues artist.

In December 1958, Williams was released under the despicable porvisions of "servitude parole", where he was "freed" though had to provide 80 hours of labour per week — clearly, standards of freedom were a joke at that time. Even though he was invited right off the bat to perform at the great Newport Folk Festival, the parole board prohibited him from performing. Still however he fortunately found time to record, cutting such tunes as the parole-condition fueled "I'm Still Not Free". Finally, his parole was lifted and he indeed played at the 1964 Newport Folk Festival. Continuing to tour the United States during these years, he expanded internationally by 1966, touring Europe. He also became great friends with Mississippi Fred McDowell, recalling, "when I got off parole, I started to play with Mississippi Fred McDowell. He taught me to play slide. Me and Fred were great friends — we was right together traveling the country. If he only had a nickel, he’d of given it to me. You know that girl Bonnie Raitt? Fred taught her, and now she’s so good it makes your head spin."

After taking a small break and moving to a different area of Baton Rouge in 1968, he began to focus on music again by 1970. Performing at American and European folk festivals, he also cut more records, adding to his great discography. As the 70s pushed forward, though, Williams, then in his 60s, experienced wavering health. After being diagnosed with cancer, he died of the disease on December 31st, 1980.