One of the earliest figures in recorded blues, Peg Leg Howell was both a wonderful singer as well as guitar player. As well, he's remembered because of his catchy nickname "Peg Leg"; this came from an incident on a farm, when his brother-in-law shot him in the leg. Resulting in his lost leg, a positive from this was that Howell then shifted his focus during the 1920s on music, leading him to several sides for Columbia from 1926 to 1931. 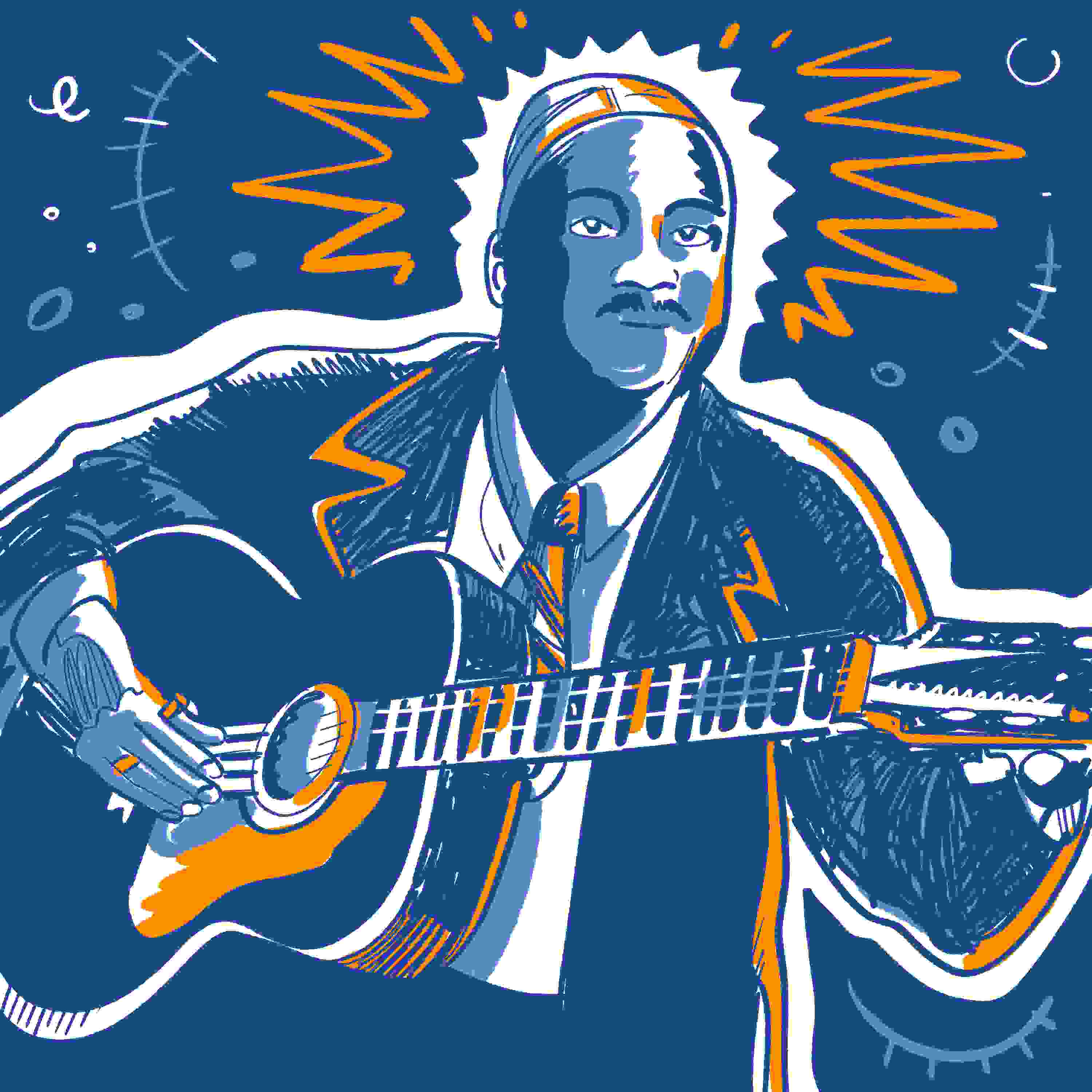 Luckily, those initial recordings Howell made with Columbia are remarkably clear and numerous. Especially being one of the elder-statesmen of blues, being even much older than others like Son House, it's almost as if Howell captured a kind of ancient-wisdom quality with his blues, especially with the classic versions of lyrics he'd use.

Each of his early recordings are filled with gem-like bass-runs, treble-side ornaments, and full strums of chords. Bends are played tastefully, and overall his songs give the impression that much thought was put into the structure. Rather than improvising through each song fully, they have a thoughtfulness to them in the way each guitar phrase links with the next, going from the I chord to the IV chord, ending with the turnarounds, and so on.

On top of all of this, he layers his booming bass voice, with a timbre almost like Blind Lemon Jefferson, resulting in a great pool of highly stimulating music.

Born in 1888, Howell's early life is not highly document, though he did attend school in until the 9th grade, and much later learned the guitar at age 21, in 1909. It wasn't until 1916, when he was 28, that he lost his right leg; after a disagreement, his brother-in-law shot him with a shotgun, forcing him to amputate his right leg. Recounting later to George Mitchell, the musicologist who found Howell in 1963, "I didn’t do much, just messed around town [Eatonton]. I came to Atlanta when I was 35 years old. I just got tired of living in a small town. I didn’t do much of anything when I came to Atlanta either.” Devoting more of his time though to music, Howell would play in parks and streets with friends such as mandolinist Eugene Pedin, guitar Henry Williams, and violinist Eddit Anthony. While in Atlanta, he tried to take part in the lucrative bootlegging market during prohibition; this led him to a short time in jail around 1925 where he'd learn new songs such as New Prison Blues.

Shortly after his release, people from Columbia Records found Howell in Atlanta. Howell also told Mitchell, "The men from Columbia Records found me there in Atlanta. A Mr. Brown – he worked for Columbia – he asked me to make a record for them. I was out serenading, playing on Decatur Street, and he heard me playing and taken me up to his office and I played there.” Thus, by November 1926 Howell was one of the cohort of early blues musicians who were recorded, showcasing his steady hand style, as he'd play colorful bass movements, sprinkled with treble-side lines and luscious chords. The session earned him $50 plus biannual royalties.

With this newfound success, as Columbia had pressed around 10,000 copies of his initial records, Howell continued to sing around Atlanta, Georgia. The steady stream of income through music continued into the late 20s; Howell's records with Columbia continued to sell 1,000s of copies, although this stream ran dry with the Depression. Returning to selling liquor in the 30s, Howell stopped playing for the most part, taking up other jobs as a means to make a living.

Continuing in this way throughout the decades, notably he lost his left leg in 1952 due to diabetes. Although he was still known in his community, it wasn't until George Mitchell, Roger Brown, and Jack Boozer travelled to Atlanta in search of Howell in 1963 that Howell became more active again.

Mitchell noted, “When we stopped by Shorter’s Barber Shop, one of the oldest establishments on Decatur Street, we decided to ask about additional blues singers as well. After mentioning Peg Leg Howell, ten men gathered around us offering to lead us to him. Finally after the confusion had subsided and we had gotten over our shock, we picked two of the men to take us to Howell. We rode about a mile past Capitol Square, turned into a dirt road and pulled up in front of Howell’s small and shabby house. Our guides were knocking loudly on the door when we heard the faint voice of a very old man telling us to come in. The house was dark and musty, but the moment I saw Howell sitting in his wheelchair in the back room, I recognized him from his pictures. He appeared to be very old, was unshaven, and had no legs. Just seconds after I introduced myself, he eagerly reached for the guitar I was holding. He took it in his large, worn hands and immediately began singing and playing. "

After making more recordings in those final years of his life, Howell died in Atlanta in 1966.