Perhaps the most successful musician to emerge from pre-war blues beginnings, Muddy Waters realized a unique sound, playing his own sort of blues. As Willie Dixon recounted, "there were quite a few people around singing the blues, but most of them was singing all sad blues. Muddy was giving his blues a little pep." That extra pep, which by 1944 Muddy was playing with his newly electrified sound, was one of several difference makers in his music.

Although most of his guitar playing doesn't exactly have the finger-busting ways of Blind Blake or Blind Willie Johnson, there's a certain nuance to Muddy's playing - especially his bottleneck playing - which makes it stand out. As some have characterized it, his slide playing can sound like a whiny cat scratching away (which can fit the tunes so well), and his guitar playing overall always has that unmistakable groove & feeling. 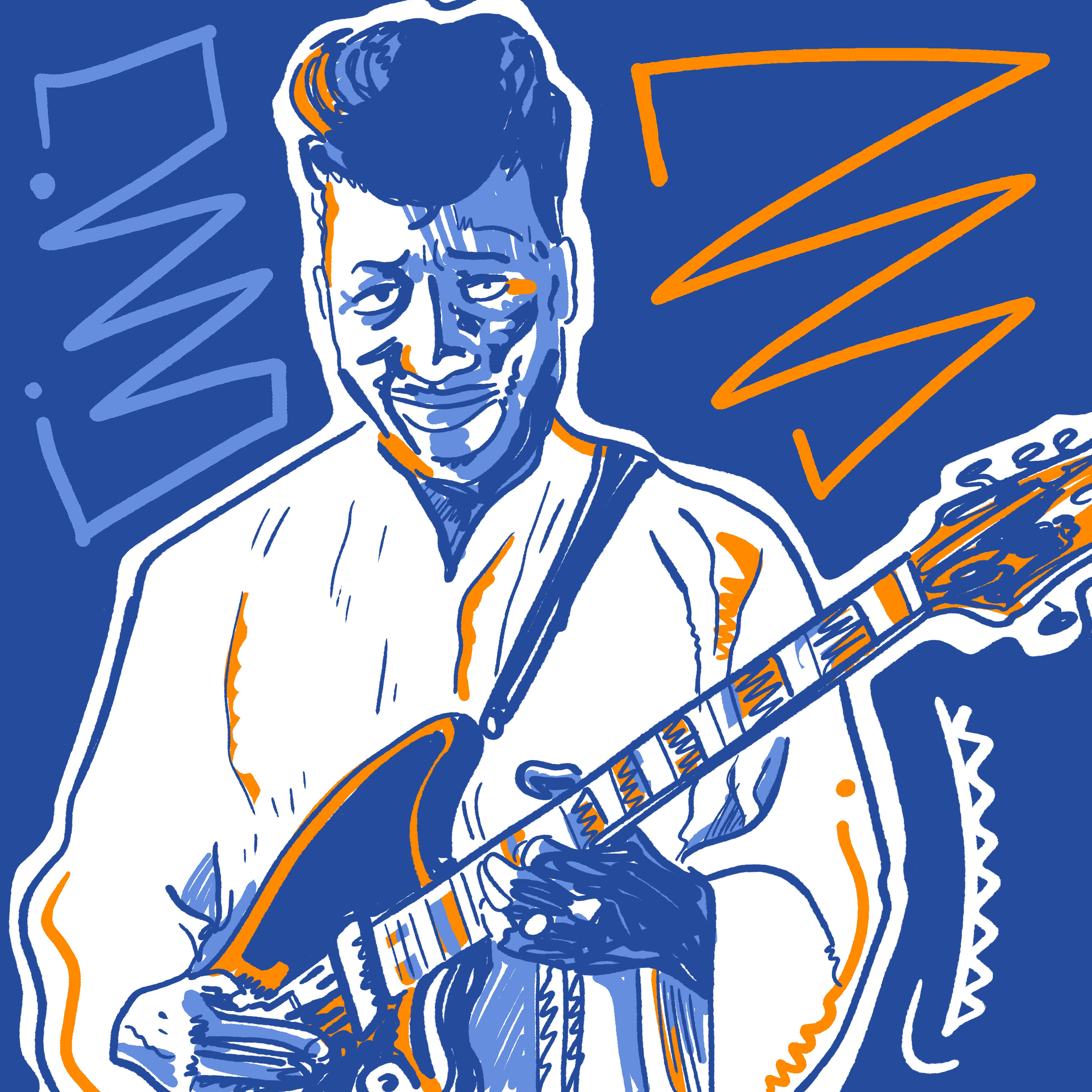 Louisiana Blues
I Can't Be Satisfied
Rollin' Stone
Here's a guitar lesson on Muddy Waters' landmark recording, Rollin' Stone. For a deep-dive into the song which gave the Rolling Stones their name, watch here!
Rollin' And Tumblin
In Muddy Water's Rollin' and Tumblin', he features his classic, frantic bottleneck slide playing. Of course, it's coupled with his thunderous vocals to tie it up!

Muddy Waters' guitar playing is actually perhaps one of the more unique styles among his cohort of pre-war blues musicians. While his playing certainly borrows the music local music of his time, his playing has this kind of outrageous fun to it. For example, on Louisiana Blues, his bottleneck guitar lines sound, at times, like his wringing the neck of a goose, with a wacky vibrato that gives it a great feel.

Listening to his earlier 1940s recordings, when Muddy crossed paths with Alan Lomax and made his first recordings, the spirtual songs he plays almost sound like Blind Willie Johnson, with the way Muddy works the bottleneck slide. Then, in the later 40s when he recorded Louisiana Blues & I Can't Be Satisfied, he features his groovy playing, with squacky slides that run all the way up the treble strings and down the bass strings.

With Muddy's playing, it's perhaps not the nailing of notes which is super important, as much as the freedom and ease with which he plays, which seems to cultivate a deep-pocket sense of time, and treble-string notes that don't miss a beat.

Born around Rolling Fork, MS, or at least fairly close by to there, McKinley Morganfield was raised mostly by his grandmother, since his mother had died shortly after his birth. It was his grandma who named him "Muddy", noticing that he loved to play in muddy creeks. Not a great deal is known about Muddy's childhood, though, with the influence of his church and local musicians, he began to perform locally as a teenager, playing harmonica. Years later, he recalled how he was 17 years old (which would've been in the early 1930s) when, "I sold the last horse that we had. Made about fifteen dollars for him, gave my grandmother seven dollars and fifty cents, I kept seven-fifty and paid about two-fifty for that guitar. It was a Stella. The people ordered them from Sears-Roebuck in Chicago".

Around that same time, upon becoming an adult, Muddy embarked on his first musical tour with Big Joe Williams, and seems to have kept his playing up, even through the Depression years. Still mainly around the Missisippi area at this time, Alan Lomax visited his area on behalf of the Library of Congress, to record talented folk artists; Muddy was among the yet unknown who was chosen, being recorded in 1941 and 1942. In later years, he recalled how profoundly hearing himself back on tape impacted him; namely, it gave him self belief, knowing that he sounded just as good as his contemporaries who'd recorded also.

Perhaps on the wings of this excitement and self belief, Muddy set off for the city in 1943, headed to Chicago with a single-minded aim to play music full-time. To support himself during these leaner years, he briefly worked odd jobs, driving trucks and working at factories. Then, he'd scope opportunities to perform. Big Bill Broonzy helped give Muddy a start, by hiring him to open for his raucous shows. Realizing how loud and packed these urban venues could be, Muddy quickly realized he'd need amplification; it was in 1944 that he got his first electric guitar, and began to define the sound of what music journalists would name "Chicago Blues". Although he started to garner more recording dates in the latter half of the 1940s, it was his recordings for Aristocrat Records, when the magic really began. Muddy recorded some of his most legendary takes with Aristocrat Records (which later changed its name to Chess Records), and it was at this time he recorded tunes like I Can't Be Satisfied, Louisiana Blues, and Rollin' Stone, which became a hit record.

His 1948 records were the early indicators of his 1950s gravy train of hits; in 1953, he convinced Chess to allow him to record with his preferred band (rather than the studio bands they more or less imposed upon him), and that band consisted of Little Walter on harmonica, Jimmy Rogers on guitar, and Otis Spann on piano. Recording such tunes as Hoochie Coochie Man, Forty Days and Forty Nights, and I'm Ready, Muddy began to reach commercial success, charting on Billboard magazines R & B hit lists by the mid to later 1950s.

In the 1960s, Muddy brought his proven-to-be-unique sound to much larger venues, on the wings of the 1960s Folk Revival excitement. He wasn't quite like the others, however; whereas Skip James, Mississippi John Hurt, and Fred McDowell largely stayed true to their more acoustic roots, Muddy leaned heavily into his electrified Chicago sound, which resonated with emerging acts of the day, such as the Rolling Stones, Cream, and Fleetwood Mac. Riding the wave of his success, he continued to record heavily in the 1960s, and was buoyed by younger, Caucasian rock acts building upon his music.

By the 1970s, and into the early 1980s, Muddy was already a living legend, whose recording date bookings were sought after by labels on either side of "the pond". Gaining even more acceptance in the mainstream music world (at that time), he collected Grammy awards, performed alongside the Rolling Stones and Clapton, and continued to produce quality work - notably with Johnny Winter between 1977 and 1981.

By 1982, Muddy's health began to deteriorate, and he eventually succumbed to cancer-related consequences in April of 1983. Unfortunately, to this day, there's a court battle between Muddy's heirs and Muddy's former manager's family, over who gets to reap the royalties from Muddy's music. Hopefully in time the courts make the proper decision in passing those earnings to his family, to whom Muddy certainly almost certainly would've preferred over his manager and his manager's wife's family.