Among the most feel-good songs you can ever dream to listen to are Elizabeth Cotten's flowing melodies. With a right-handed guitar flipped upside-down, she's got the same effect on anyone listening to her tunes, by how great they sound.

Her life story is quite something to; at the age of 9 she had to quit school to begin working as a domestic, through her teens she voraciously learned guitar and wrote Freight Train, she gave up the guitar at 17 to raise a daughter, and she recorded her first album at the age of 65, then she purchased a home for her daughter and her grand-children in her 70s. 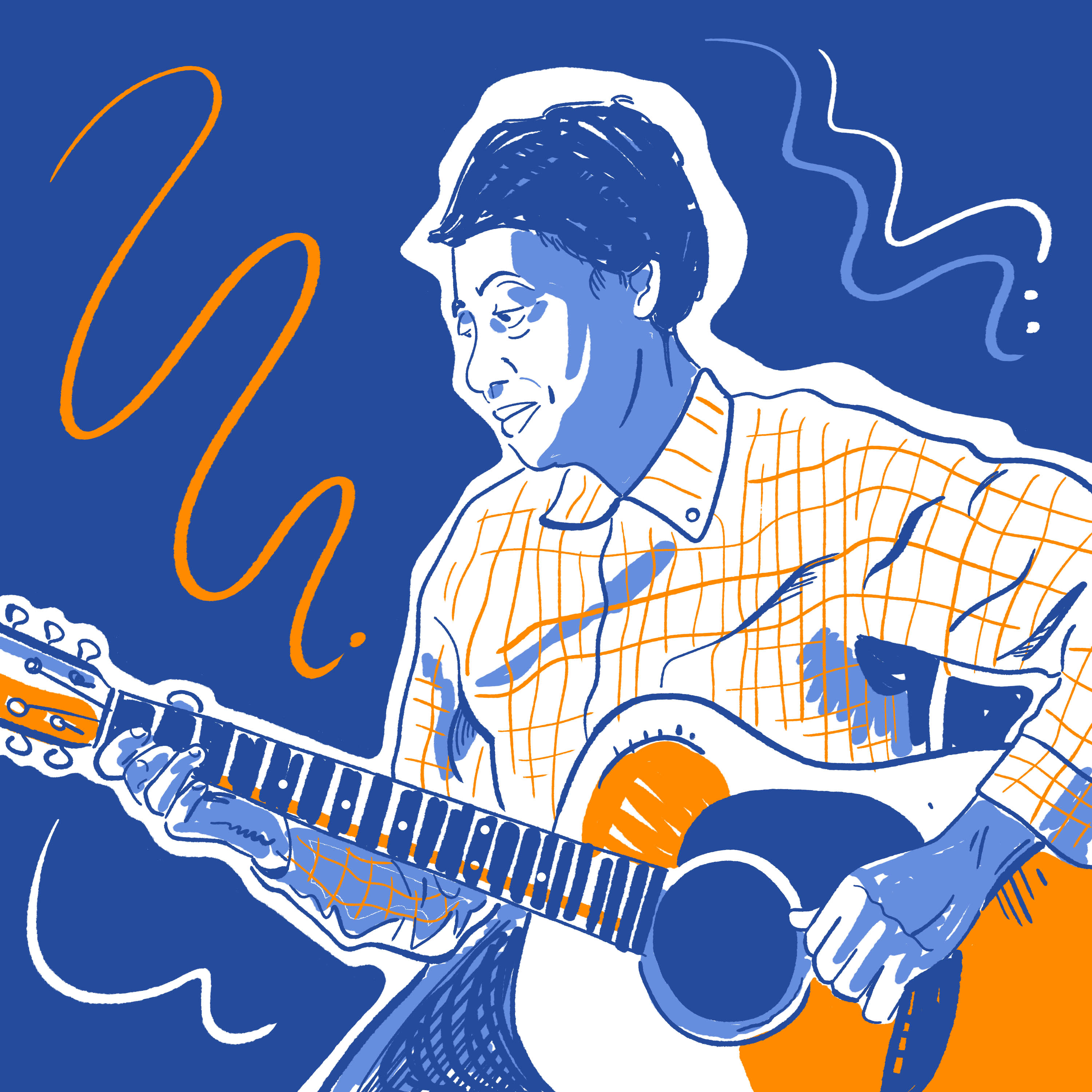 Ain't Got No Honey Baby Now
One of the most beautiful songs of Elizabeth Cotten's library, Ain't Got No Baby Now. Flowing fingerstyle lines, and nostalgic lines; learn the song today.

The melodies which flow from Elizabeth Cotten's fingertips are beyond beautiful, and timeless beyond scope. The bass notes usually alternated with octaves, or different chord tones to spell out the chord. Oftentimes her songs are don't stray from open position on the neck, so the chords she plucks out are the usual chords (C, G, E7, etc), but she'll toss in a different bass-note, or improvise a simple note modification on the treble-side. That (and the always driving rhythm) are perhaps part of her "toolbox", but Elizabeth Cotten certainly puts that all to incredible use to produce the amazing storytelling which is heard on her recordings.

On the treble-side, the melodies that she plucks are those unmimstakable old-time, folk melodies that you know when you hear. Since Elizabeth Cotten played a right-handed guitar totally lefty, her treble strings were where the bass strings usually are (so that the strings were upside-down); therefore she plucked the thin strings with her thumb, and picked the bass-notes with her index and middle fingers. That's one mechanical example of how her sound was very unique.

Born in the decade just before the new century - 1893 that is (and part of that same age cohort as Charley Patton, Blind Blake, and Blind Lemon), Elizabeth Cotten was born in North Carolina. Actually she didn't have a name until her 1st day of school when her teacher asked for her name, since she'd been called Little Sis at home. Unfortunately, Elizabeth wasn't in school for long, since at the incredibly early age of 9 she was forced to quit school and start working as a maid.

Although she came from those incredibly thwarting circumstances, she had begun learning guitar at the age of 8, and her mom helped her purchased a Sears and Roebuck guitar once she turned 12 years old; it cost $3.75, which is about $110 in 2022 money. Without any formal training, though likely with the help of friend, Elizabeth began learning rags and songs for dances and parties. Thus, through her teen years, Elizabeth Cotten was working as a maid, while becoming better and better on the guitar at home; she wrote Freight Train during this period, among other songs of hers.

Once Elizabeth Cotten turned 17, she got married, had a daughter, and largely set the guitar aside to focus on her family life. After doing some moving around, eventually she settled in Washington, DC, where she'd eventually befriend a young John Fahey. Throughout this period of most of her adult life, Elizabeth Cotten largely stopped playing (apart from occasional church performances), devoted to her family and busy with her manual labor work.

In her later adult years, Elizabeth Cotten found herself working at a department store, where she helped a child wandering in the aisles find her mother; that child was Peggy Seeger, of the famed Seeger family. Eventually, the Seegers hired Cotten as a house-maid, and - while working at their house - picked up the family's gut-stringed guitar and re-learned to play it almost immediately. As the story goes, Ms Cotten found the guitar, began playing it, and felt embarassed when she was found playing the instrument. Of course, the Seegers were in awe by her playing, and helped setup her first record date in 1958, when she was 65 years old.

Her well-deserved success later in life, playing at the Newport Folk Festival alongside John Lee Hooker, Muddy Waters, and Mississippi John Hurt, continued from the 1960s until her death in 1987. Fortunately, she was able to purchase a house for her daughter and her grand-children in Syracuse, New York.